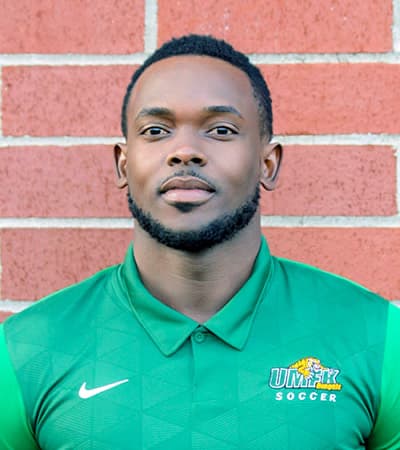 Samuels joined the Bengals in 2007 as an outstanding player from Jamaica. Samuels represented Jamaica at the Under 17 and Under 20 levels before coming to UMFK. While at UMFK, Samuels managed to play in 73 games of the 80 games played and posted a record of 80-4-3. Samuels posted a personal record of 7 goals, 20 assists, and 34 points as a defender. Samuels won the Sunrise Conference all four years as a Bengal and was an All-tournament team player in 2010. He was NAIA Academic All-American in 2010 and 2011 and was part of the team who won the USCAA Championship in 2010. Samuels was also part of the 2008 team inducted into the Hall of Fame for their achievements. They reached the Elite 8 round in the NAIA during that season.

After graduating from UMFK, Samuels spent two years as one of the Graduate Assistant soccer coaches at Union College in Barbourville, Kentucky, where he also completed a master’s degree in Education Leadership. Upon his return, he assisted the Men’s Soccer Team in 2014, where he helped build the program to win two USCAA championships. He currently serves as Head coach and the International Student Advisor/instructor at UMFK and recently completed his MBA through the University of Maine.

Samuels took over as Head coach in 2018 and is currently in his fifth season, using his prior playing and coaching experience to help guide him through various challenges and situations as they arise, whether it’s tactics on the field or the relationships built from it. As head coach, Samuels has compiled a 43-12-8 record over four seasons (COVID 2020/no season). Academic excellence is also a massive focus for Samuels; hence, for the past four years, his team G.P.A has consistently been above a 3.0-grade point average.

Samuels also coached the Fort Kent (Warriors) Boys High School soccer during the 2017 season. He led the squad to a 14-2-2, won the Northern Maine championship, and was runners-up in the State Final. Samuels also coached at the Semi-Pro level for Knoxville Force.