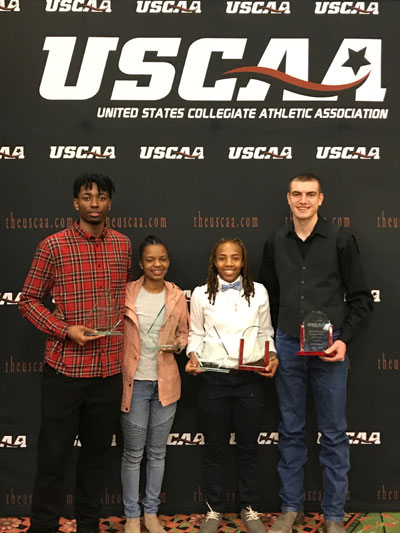 Uniontown, Pennsylvania-- The University of Maine at Fort Kent Basketball teams had an impressive showing at the 2019 USCAA Division 1 Basketball banquet before they begin play at the National Tournament this weekend.

Jarid Walton took home the Student Athlete of the Year for his hard work in earning a 3.9 GPA, big minutes as the Bengal big man while simultaneously running a horse wrangling business in his home state of Michigan. Walton was also voted a Second Team All-American with his 15 points and seven rebounds a game.

Chance Cole was voted on the First Team All-American after an impressive first year on the Bengal team putting up a team high 17 points per game.

On the women's side, Tajaheray McMahan was named a member First Team All-American Member after a season in which she was second in the USCAA in points per game with 18.7. Her 3.4 assists and 3.5 steals per game were also among the highest in the nation.

McMahan's backcourt mate, Trinity Washington. took home the biggest piece of hardware with her National Player of the Year trophy. Her award was in recognition of her near Triple Double averages on the season with 14 points per game, 10 rebounds per game and seven assists per game to go along with three steals per contest. As Ice Cube would say, "get her on the court and she's trouble, last week messed around and had a triple double."

Walton and Washington were both named to the All-Academic teams as well for earning a GPA above a 3.5.