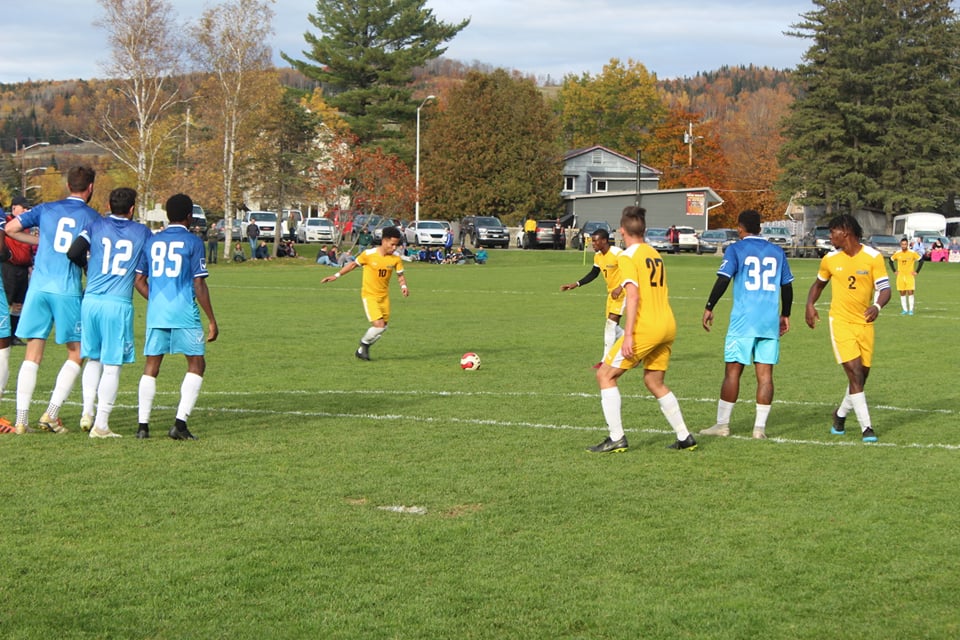 Bengals lining up for the free kick against Bryant & Stratton College in their win Saturday.

Fort Kent, ME—There are a few different ways that one would be able to identify that it is Homecoming Weekend at the University of Maine at Fort Kent: the annual Scarecrow Festival parade through town, the return of Alumni who graduated in years prior, the colorful Fall foliage and most importantly, soccer and volleyball action. The Fall sports teams continued their winning ways going undefeated over the weekend as they continued to prove they belong amongst the elite teams in the country.

The Men’s soccer team kicked off the weekend with their match against Bryant & Stratton College of Syracuse, who throughout the years have been the Bengals biggest competition for national USCAA prominence. At the time of the match, the Bengals were ranked as the number two team in the national poll, with the visiting Bobcats ranked as the number three team. In what was a physical and whistle filled contest, Aaron Boateng connected on a pass from Lovel Jonas midway through the second half to tie the game. After two overtimes, neither team could find another scoring opportunity and the game ended in a 1-1 draw.

On Sunday, the Women’s Soccer team got the momentum started for the Bengals as they clobbered the Clippers of the University of Maine at Machias 4-0. Searra Herbert had a Homecoming Hat Trick with three goals during the match, the fourth goal coming from Shelby Cowin. The Women’s Soccer team record now moves to 7-3.

The Men’s soccer team also took care of business against the Clippers winning their match 6-1. Travar McCollah accrued his own Homecoming Hat Trick with his three goals. Ali Amin, Lovel Jonas and Lasalle Durio also scored goals for the Bengals. After the weekend, the Men’s Soccer team record advances to 10-1-3.

The soccer teams will have their last home game of the season next Saturday the 19th of October against Fisher College at 12 and 2 PM.

Wrapping up Homecoming weekend was the Women’s Volleyball team with their one match against the University of Maine at Presque Isle. Before the match, Head Coach Selina Castro acknowledged the three Seniors as this was their final match in the Jungle. Rachel Nance, Luse Lumas and Ivette Trujillo all played integral roles for the Women’s Volleyball team during their time here in Fort Kent and they proved how valuable they were once again as they made quick work of the visiting Owls, beating them in three straight sets. The volleyball team record is now 11-8.