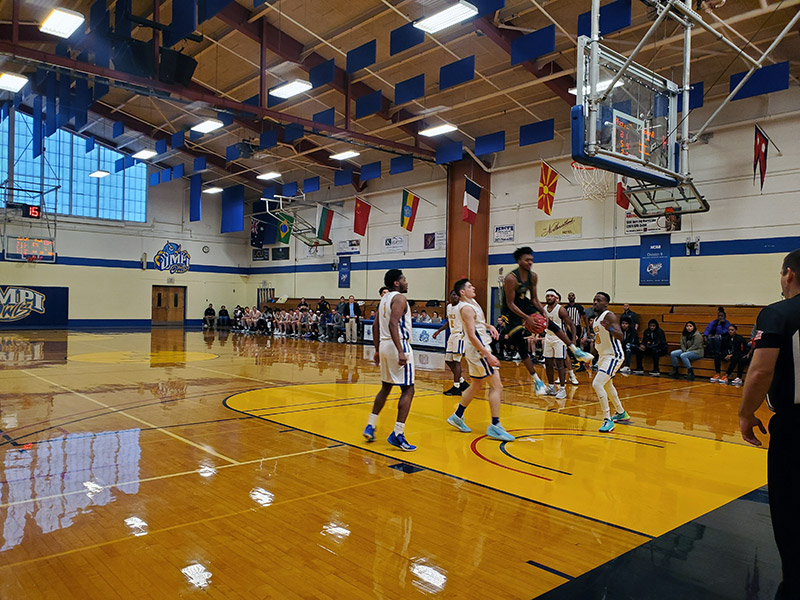 Freshman point guard Micah Petty elevates for the finish against the Owl defense.

Presque Isle, Maine-- It was the afternoon of December 7th, a day that will live in infamy. It was two hungry teams, unsatisfied with their current records. It was a rivalry built off proximity, but one that blossomed through back and forth battles over recent years. It was the UMFK men’s basketball team taking on the UMPI men’s basketball team, the Aroostook rivalry.

It was also a tale of two halves, as the Bengals took a six point lead into the half despite strong early 3-point shooting from the home Owls. Patrick Pauwels played a tremendous first half scoring 13 points from all over the floor including at the rim, beyond the three point arc and at the free throw line. Jaequan McNeal also provided a spark off the bench for UMFK with his 8 first half points.

The second half was all about the Owls as Shyquinn Dix lead his team from behind with 14 points in the second half, matching his first half point total. He led all scorers with 28 points on the afternoon.

The game could’ve went either way, as there were 11 total lead changes throughout the game. A late corner three from the Owls DeAndre Duncombe put the Owls up five with 30 seconds left. Mekhi Foreman of UMFK responded almost instantly with a 3-pointer of his own to cut the lead to two in favor of UMPI.

With only 15 seconds remaining, the Bengals had no other choice but to foul and they put Shyquinn Dix to the line who sealed the deal for UMPI, putting the Bengals away. This was the Bengals first loss on UMPI’s floor in five seasons.

The Men’s basketball teams next game is against Marysville State in North Dakota next week as they will look to turn things around and end the first semester on a positive note.

The Women’s Basketball team is set to embark on a major trip themselves as they will be playing five games this week in Oregon, Washington and Idaho. The Lady Bengals will be facing off against some of the top 25 ranked teams in all of Division III and the NAIA in hopes of building a strong strength of schedule for their own post season run later in March.

To keep up with the travels of all your Bengal teams, make sure to follow us on social media, Faceboko: UMFK Bengals, Twitter: @UMFK_Bengals and on Instagram @umfk_athletics.