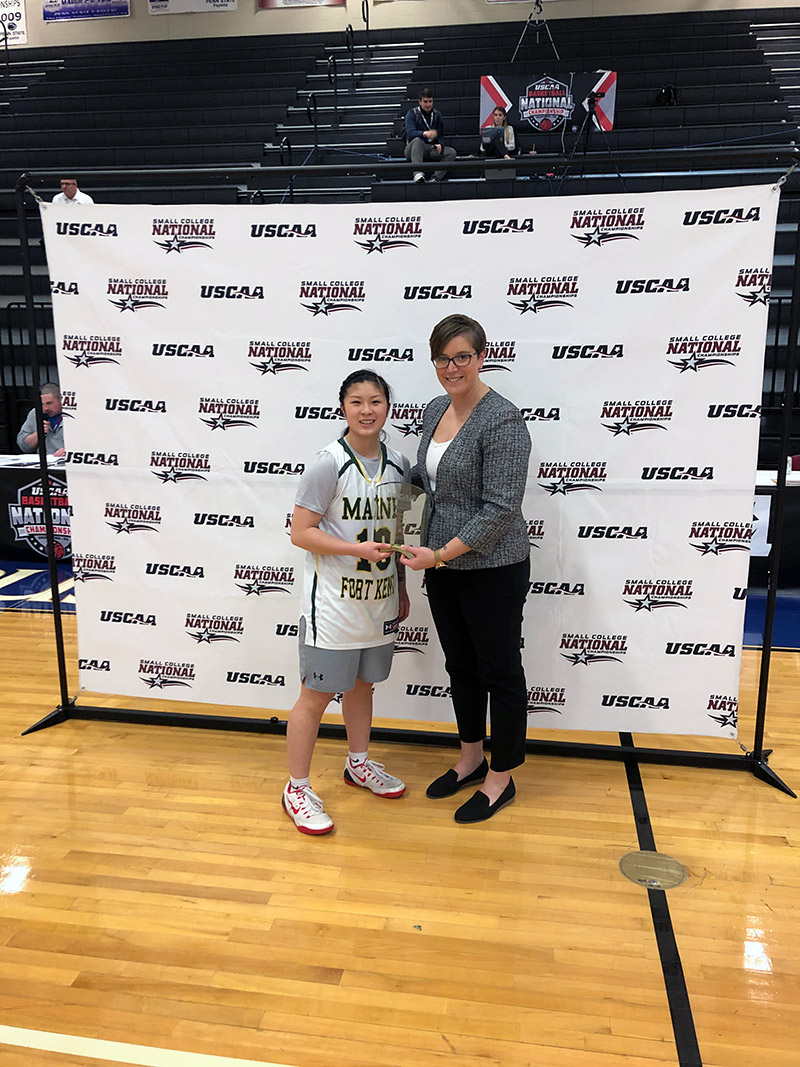 Keri La, winner of the USCAA National Tournament Skills Challenge 3-point contest, with a representative from the USCAA.

Uniontown, Pennsylvania—The University of Maine at Fort Kent Basketball programs have showed tremendous consistency as they each successfully reached the USCAA National Tournament again in 2020. The men qualified as the 8th seed and made the tournament for the fourth year in a row, and the women qualified as the 7th seed reaching the tournament for the third consecutive season.

At the annual awards banquet held at the Seven Springs Resort, the Bengals were well represented, winning several awards. Bryce Gilbert was acknowledged as a USCAA Honorable Mention for his strong play this season on the Men’s hoop squad. “Bryce is a hard working kid, he has made a lot of strides as a player this season compared to his freshman season last year.” Tom Bird said about Gilbert.

Ranika Guyton and Savana Jankowski were named 2nd Team USCAA All-American for helping lead the Lady Bengals to success all season. Guyton lead the Bengals in scoring at 18 points per game, and Jankowski paced the squad with 15 points per game to go with 5.6 rebounds and an efficient 38% from 3-point range.

Most importantly, three Lady Bengals were named to the All-Academic team for their strong performances in the classroom as well as on the court. Keri La, Stephanie Cervantes and Savana Jankowski all had GPA’s over a 3.5 while balancing the heavy time constraints of being a basketball player.

At the USCAA Nationals Skills Challenge, Keri La took home the title of 3-point champion as she had both high scores of 15 and 18 and easily won the 3-point contest proving she is not only a scholar, but also a baller. Jacob Powell got second place on the Men’s side. The UMFK Bengals are proud of the accomplishments of all of our basketball players!