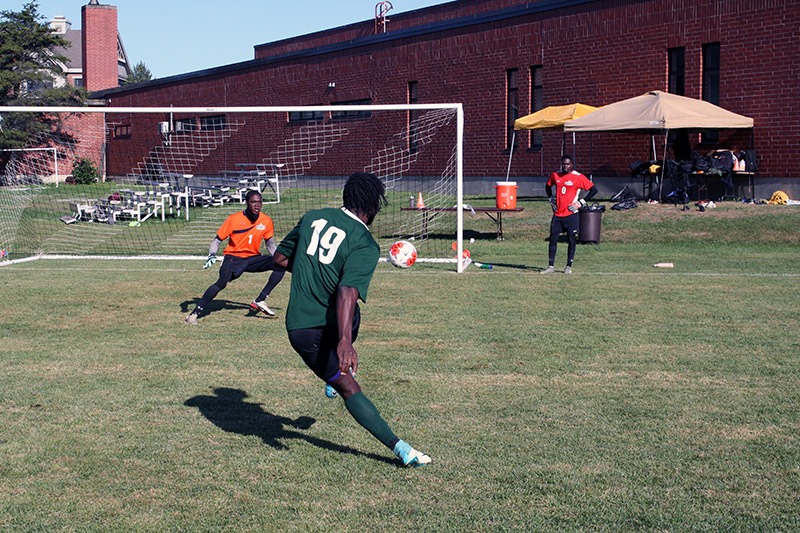 Men's Soccer players practicing at the Sports Center, patiently waiting until it is there time to run the marathon again.

Fort Kent, Maine—The men’s soccer team was so close to a national championship victory last November, they could almost feel the smooth gold trophy in their hands. After coming to a draw in mid-October with their top rival in USCAA play, Bryant & Stratton College Syracuse, they faced off with the Bobcats once again in the USCAA National Championship match, eventually falling 1-0. Oniqueky Samuels, the former Bengal soccer star turned skipper, was looking for his first championship as a Head Coach. “It was disappointing to lose in the final match, but I’m very proud of the men for making it to that point, and we still had quite the memorable season to look back on with some great wins for our program.” Said Coach Samuels.

This season, despite the obstacles the pandemic has created and the fact that the Fall sports seasons have been postponed until the Spring, Coach Samuels has recruited a high volume of talented student-athletes and has begun the process of getting them back in shape, in hopes of finally getting over the hump.

Samuels continued, “With there being more guys on the roster, the competition aspect of practice will rise, and I’m certain that it will create a fun atmosphere where the guys enjoy coming to practice and competing for spots.” Spots will be coveted, without a doubt, and with so many players competing for said spots, it is Samuels’ vision that the cream will rise to the top. “We have some key returners and All-Americans returning from last season, and I’m very happy how recruiting turned out so I am optimistic about the talent we have.”

Talent has never been an issue with the soccer programs at UMFK, it is all about whether or not the team can play together and hit their stride at the right time, while navigating through the immensely competitive gauntlet that is USCAA National Tournament play. “We know that Bryant & Stratton and Florida National, among other tough teams, will be waiting for us at the tournament, and it is my job to get the guys ready to be at their best when we begin playing in the Spring.”