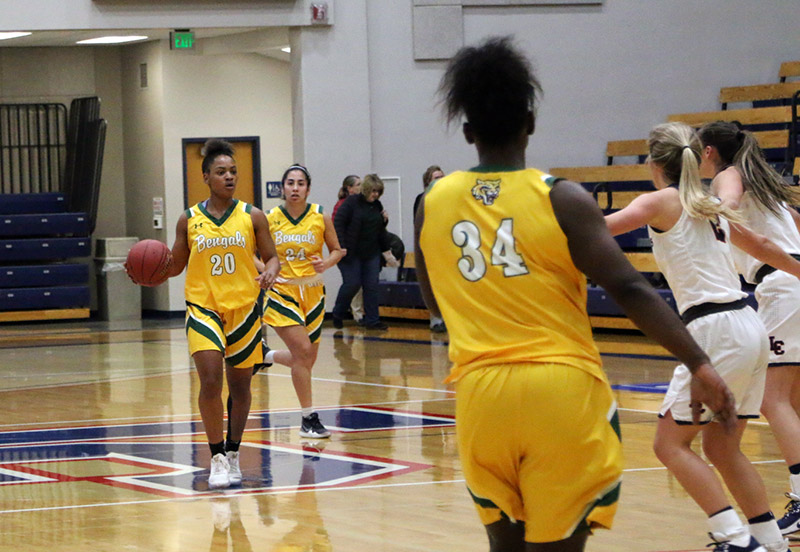 Ranika Guyton bringing up the ball against Lewis-Clark State in Lewiston, Idaho.

Fort Kent, Maine—The University of Maine at Fort Kent Women’s Basketball team took an expedition through the Pacific Northwest of the United States to play five games last week, and similar to Lewis and Clark a couple hundred years ago, they faced a ton of adversity. Unfortunately for the Bengal team, there was no saving grace in the form of a Sacajawea to help them out.

Every and anything that could have went wrong for the Bengals did on their trip, including flight cancellations, lost luggage, traffic jams, injuries, and lights out shooting from their opponents. The Bengals first played Multnomah University in Portland, Oregon and hung tight for most of the game but struggled against the 6’5 center from the home team. In their next game, they took on the 15th ranked team in the country for Division III, Whitman College. Whitman hit 12 three pointers in a rout of the Bengals. The next night, despite an incredible 38 points from Ranika Guyton, the shorthanded Bengals lost to Whitworth College and finished the game with four players on the court after Ivette Trujillo and Savana Jankowski went down with injuries the night before. The expedition continued to Lewiston, Idaho to take on Lewis-Clark State College, the 13th ranked team in the NAIA. A blowout loss on Monday did not deter the Bengals much as they matched up with Lewis-Clark State for a second game in a row and were only down five at halftime but went cold in the second half and only scored 14 points in the second twenty minutes of the contest.

The Lady Bengals basketball team is optimistic about the future. In the Spring semester of the season the Bengals will face off with mostly USCAA opponents as they hope to make a push to qualify for the USCAA National Tournament. The Bengals are asking Santa Claus for good health in the New Year as having everyone 100% healthy will undoubtedly bring a better consistency for the team as they continue on throughout the season.

The Men’s Basketball team also took a major trip to North Dakota as they matched up with very strong Division II opponents. They lost all three games on the trip to Maryville State, the University of Mary and Valley City State University. The Men’s Basketball team is also optimistic about the Spring semester portion of the season as they know that the very tough schedule they faced in the first part of the season, will only make them a stronger team when they play USCAA opponents moving forward.

Both basketball teams will host Unity College on January 7th, Bengal fans who are in town despite school being closed for Winter break are highly encouraged to attend.

The Spring semester will also bring the start of Track and Field Season. Head Coach Matt Dyer has already started with preliminary early season practices and cannot wait to begin competing next month. Stay tuned for updates regarding our talented Track and Field student-athletes.